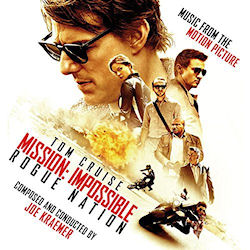 Finally, a decent score to a Mission Impossible movie! Well, that’s an understatement. Joe Kraemer’s score to Mission Impossible: Rogue Nation is both suspenseful, inventive, and not least very catchy. He respects Lalo Schifrin’s musical themes and style from the original 60’s series while also introducing great new material, and he elegantly incorporates Nessun Dorma from Puccini’s Turandot. After all, the movie is Mission Impossible at the Opera. It only took five tries to get a good score to an M:I movie, and hopefully Kraemer will also do the next installment as it’s got the same director. Fingers crossed.

I was going to point out some highlights, but you really should give the whole score a listen. Enough said—listen to it all here.